Broxburn travelled to Peffermill for the top of the League Cup Section decider with high flying First Division side Leith Athletic.

Glorious sunshine and blue sky were once again in evidence but the temperature distinctly chillier than the previous week with a breeze to contend with for both sides. The Brox were able to name an unchanged side from last week’s convincing win at the Albyn against Fauldhouse.

Leith were looking to get back on track after their Alex Jack Cup Final loss to Crossgates Primrose last Sunday.

Broxburn attacked from the kick off Tait making a great run down the right and cross where Ross Nimmo got in front of the home defender but couldn’t get enough on his touch to beat McLellan in the home goal.

Leith had an even better chance a minute later Stewart outpacing Dan Nimmo his cut back was flicked on to Wardlaw in great position on the left side of penalty box but Wallace denied him with a great save.

In an all action start, great play from Ross Nimmo down the right saw a deep cross to the back post which was well defended by Allan to deny Tait who was waiting to capitalise on any error.

Chances continued to be created this time to the home side in 6 minutes Sproule played in 1 on 1 with Wallace but his shot hit the outside of the right hand post.

In 10 minutes Barker won a free kick 25 yards out, Ross Nimmo taking the award and curling a shot round the wall but just wide of the right hand post.

Tait was having a lively game on the left he made good ground, his cut back finding Nicol who found Brass who laid the ball off to Greenhill whose shot was well blocked with the ball running harmlessly through to McLellan.

In 22 minutes another great chance presented itself to the home side Bookbinder being sent through with Harrison down injured. Wallace did brilliantly at the edge of his penalty box to get to the ball and hit it off the Leith player sending the ball spiralling over the bar.

Harrison after treatment was able to continue.

Broxburn’s clearest chance so far came in 24 minutes, Ross Nimmo sending in a cross from 35 yards out, Brass had peeled away off the last defender but with the goal at his mercy headed the ball straight to McLellan.

In 29 minutes Barfoot was booked for Leith.

A real let off for Broxburn on 33 minutes from a Leith corner the ball broke to Bookbinder at the edge of the penalty box, his shot taking a big deflection which had Wallace beaten but went past the post.

Ross Nimmo was a constant outlet for Broxburn down the right putting over another great cross for the late arriving Donaldson to get inbetween 2 home defenders but sending his header over the bar.

Broxburn fashioned a clear shooting opportunity in 40 minutes Tait crossing from left Greenhill getting a touch to it with his head, Leith failed to clear the ball, breaking to Brass who had a clear sight of goal but he shot high over the bar.

It was Leith’s turn to start on the front foot in the 2nd half Bookbinder being fouled by Greenhill just outside the penalty box to the left. Barfoot took the free kick but was wasteful with his shot which was well over the bar.

Broxburn responded in the next minute a Leith clearance breaking to Nicol 30 yards out but his effort was well off target.

Wallace once again had to look lively at the edge of his penalty box coming out to deny Wardlaw by heading the ball away.

Another long ball forward caused Broxburn issues the ball bouncing beating Harrison but he did incredibly well to recover to put pressure on Wardlaw who dragged his shot wide to the right.

In 54 minutes Barker and Mair combined well down the left with Mair cutting inside and getting off a shot which beat McLellan but not the right hand post.

Newall did well down the right in 63 minutes getting in a cross which keeper McLellan took very well with Brass waiting to pounce.

A minute later Barker was brought down by Allan just outside the penalty box in a central position. Allan was booked for the challenge. Brass took the free kick which he struck well forcing a great save from McLellan diving to his right to tip the ball over the bar.

The home side still looked dangerous Bookbinder dispossessing Newall and taking a few strides forward before striking a shot which Wallace saved comfortably.

From another long ball forward Hand got clear on the left his cross was pin point for SPROULE who fired the ball into the net to give Leith the lead.

It was almost 2-0 a minute later Crolla putting over a great ball to Bookbinnder who had got goal side of Newall but he shot over the bar.

Barker was booked for Broxburn in 71 minutes. Gillan replaced Nicol a minute later. Sproule went off for Leith replaced by O’Hara.

Leith made another change on 76 minutes Hand going off for Turnbull. Dan Nimmo was booked for Broxburn in 80 minutes.

In 81 minutes Broxburn were awarded a penalty a great ball into the box saw Mair had got in front of his marker and certain to have a clear shot but was brought down.

Ross Nimmo stepped up to take the penalty having converted 2 out of 3 against Craigroyston but his kick was well read by McLellan who dived to his left to save but GILLEN was first to react and slotted the ball into the net. Time 82 minutes.

Hume was sent off for Leith in the ensuing protests having been booked already.

Bookbinder was replaced by Mackay for Leith in 85 minutes.

In 86 minutes the Brox almost edged ahead Mair put over a great ball from the left which was flicked on by Brass for the late arriving Newall but he got under his shot and sent his effort over.

In 89 minutes Broxburn broke Leith hearts by grabbing a late winner Mair again involved from a short corner with Ross Nimmo, his cross picked out Dan Nimmo at the back post, he headed back across the goal for BRASS to apply the finish from a few yards . 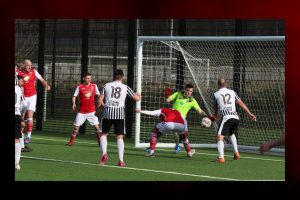 Beagley came on as a replacement for Barker in 90 minutes.

The substitute almost had an immediate impact doing great work down the left beating 2 defenders before pulling the ball back to Greenhill who shot wide.

A great win for Broxburn with the late late show grabbing two late goals to clinch top place in the section against a very competitive Leith side. The Brox move forward to the last 16. Back to league business next week at the Albyn where relegation threatened Dunbar United come calling.